Since it’s “technically” almost carnival and fair season, we might as well eat something that tastes like summer. And these healthyish grain-free and gluten-free fried apple fritters are just the ticket. Made with a simple dough, no refined sugar and pan-fried in coconut oil, these are absolute perfection if you’re craving something a little sweet, a little savory and a little nostalgic.

These came about as a bit of an accident. I was attempting to make healthy fried apple pies (in the vein of Mickey D’s), but these are significantly easier to make, and forming the dough isn’t as face-to-palm frustrating.

I’m not a big fan of sickeningly sweet desserts, so the dough for these apple fritters isn’t loaded up with tons of sweetener. Instead, you can dust with as much (or as little) powdered sugar at the end as you like. Kind of like a funnel cake, but with a yummy cinnamon apple filling.

As mentioned, these grain-free apple fritters are crazy simple to make. For the prepping stage, just chop up some apples into a small dice, mix up your dough and combine the two. (I even use my hands because it’s easy to combine that way.) The dough itself is pretty wet and sticky (thus, why the fried apple pies didn’t work). But the good news is that you’re spooning the dough into a pan versus baking it in the oven, so it works pretty darn well for this.

For the frying step, keep in mind that this isn’t a deep-fried situation. So no sweat, my pet (name that TGIF sitcom)! The goal is to just cover the bottom of a heavy or cast iron pan with coconut oil, get it hot and then drop in 1/4 cup of the dough in batches. It’s kind of like a pancake/fried dough hybrid. And that’s not a bad thing.

Once you’ve finished frying, simply drop them off on a plate lined with paper towels, dust with powdered sugar (I use Lakanto’s Powdered Monkfruit Sweetener) and serve immediately. And no matter where you are, you’ll get a taste of those warm summer days walking around the fair. 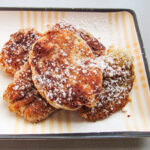 These grain-free and gluten-free fried apple fritters are made with a simple dough, no refined sugar and pan-fried in coconut oil for a sweet and savory throwback to fair food.

View all posts by Debbie

About The Edited Kitchen